Other Places to Visit... 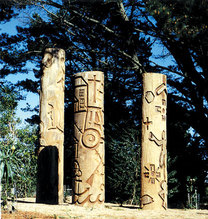 The Railway Heritage Garden is located in the centre of Robertson between the main street and railway line via either Yarranga Street to the west or Meryla Street to the East. A community garden established and maintained  by volunteers, it contains mainly Australian native plants for ease of maintenance and features one of the best displays of flowering waratahs in Australia. Floral arrangements will be on display in the marquee.
Apart from various varieties of the NSW waratah (Telopea speciosissima) it contains delightful hybrids in various colours such as "Corroboree" (speciosissima x mongaensis).The raised "Reconciliation Garden" at the Yarranga Street Entrance is a tribute to the Dharawal and Gundungara Peoples and European pioneers. The Flugelman sculpture on "The Common" is made of railway sleepers and celebrates the work of  the fettlers who built the railway line. 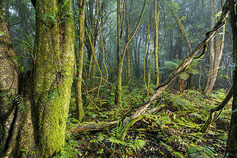 Photo: Ford Kristo
South Street, Robertson (cross the railway line from the centre of the village, turn left).
A small remnant of the original "Yarrawa Brush" which once covered the Robertson Plateau, prior to European settlement. Inside this Nature Reserve one can get a glimpse of how dense the original forest was, with its tangle of vines reaching up into the tall forest canopy, towering above.
It is classified as "Cool Temperate Rainforest", distinguished by the presence of Coachwood trees, Lillypilly, Blackwood and Sassafras. Some local patches of this category of forest  also include Eucryphia.
Ferns including many Tree Ferns, ground ferns and climbing (epiphytic) ferns are part of the distinctive flora of this reserve. It is also very rich in species of Fungi.
The rich but stony basalt soil is one of the features which separates this category of Rain Forest, which is very different from what one sees even close by, on Macquarie Pass and elsewhere in the Illawarra region. 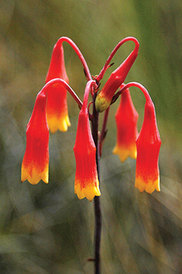 Photo: Denis Wilson
This Nature Reserve is between Robertson and Kiama, on the Jamberoo Mountain Road. It's 16km south-east of Robertson and 8km east of the Carrington Falls turn-off.
Barren Grounds Nature Reserve is on one of the most southerly plateaux of the Sydney Basin and has been a protected area for over 40 years. Surrounding the reserve is an escarpment of sandstone approximately 230-250 million years old which forms the bedrock. The reserve contains a wide variety of habitats including heath, woodland and tall forest. Excellent bushwalking gives walkers fantastic views of the Illawarra coastline and surrounding countryside. Picnic facilities are located here.
Barren Grounds is home to a diverse array of wildlife including the threatened Ground Parrot, Eastern Bristlebird, the Long-nosed Potoroo and more than 500 species of plants.
Located at the top of Jamberoo pass this 1750 hectare nature reserve is an established bird watcher's mecca. Walks include Griffiths Track, an eight kilometre walk through woodlands and heath. Cooks Nose Lookout is a six kilometre return walk.
A weather warning is applicable. Because of its altitude and proximity to the coast, the weather is subject to sudden changes, especially fog and sudden rain storms in summer. Be prepared. But a visit to the Barren Grounds will certainly reward any persons interested in flora and fauna, or just enjoying the sandstone plateau environment.